There are various solutions out there, for example:

Most of the technologies above have been around for a while.

The most important considerations in order to have a functional stretched layer 2 network are:

Not all hardware will support running stretched VLANs, an example is that Cisco Metro switches are recommended if you are considering Cisco Pseudowire-class.

Usual networking best practices apply regards keeping the number of devices on the layer 2 networks down to a reasonable level, so as to reduce the amount of broadcast traffic, and where possible implement VLANs to break up broadcast domains.

Distance and number of hops:

The desired response times from devices in either side of the layer 2 network, will dictate how far it is possible to physically separate the local segments of the stretched layer 2 network.

Example using division by the speed of light:
1000km introduces a minimum round trip (round trip being 2000km) latency of 6.7ms

Every device (hop) in the path from side A to side B, will add an element of jitter, and additional latency.

The minimum MTU of devices across the layer 2 network is very important. Every device should be set to the same MTU. If a device sends packets with a larger MTU than another device, this introduces fragmentation of packets, and more delay to their successful delivery.

It is possible to test maximum MTU using the DOS prompt, for example:

In the above example, we see that setting payload size to 1473 causes the sent packet to be fragmented and not delivered. Setting the payload to 1472 meets with success!

A nice little MTU test tool is the free to download mtutest.exe and an example of its output is below: 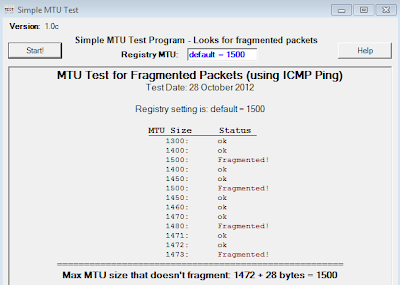 The industry drive for stretched layer 2 networks comes mostly from the cloud and the desire for on premise networks to be stretched into the cloud for possible migration strategies or to elastically take advantage of provisioning additional resource. Another driver is for moving servers with legacy applications on, and which may not take kindly to having their or other device IP addresses changed.

Personally, I would avoid wherever possible!
IT Miscellany