Wipeconfig my cDOT SIM ... and Restore

on November 28, 2016
I’ve not blogged any lab stuff for ages, so, since I wanted to see what wipeconfig does to my ONTAP 8.3.2P2 SIM, and it’s a little bit interesting and different, here we go...

Some outputs from my single-node SIM cluster:

First thing we do is take some configuration backups:

Boot the node (boot_ontap if you’re at the LOADER> prompt).

At the Boot Menu type “wipeconfig”: 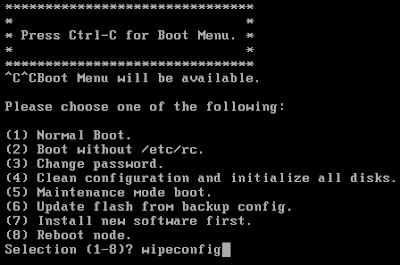 You will see the warning:

This will delete critical system configuration, including cluster membership.
Warning: do not run this option on a HA node that has been taken over.
Are you sure you want to continue?:

Type “y” to the warning.

And you should see on screen:

Then it will reboot again.

When it comes back up, it will have forgotten its identity (you’ll see localhost in the messages) and the login prompt appears. The login is now admin with no password.

Error: “show” is not a recognized command

Q: How to we restore this single node SIM cluster?

You will see a warning:

And the node will reboot back to the login prompt, with its identity has returned!

What there some purpose to this?

Yes! The purpose was reusing a HA-pair that had previously been ARL-ed out of another cluster, and making sure it was clean and ready for a disruptive headswap into the DR cluster. The wipeconfig worked fine. For a physical system, after running wipeconfig you will see:

It’s very good that the Normal Boot is prohibited here, since with the ARL and cDOT disruptive headswap, it is essential to do the option 6 “Update flash from backup config” after the disks have been reassigned and before first fully booting up ONTAP.