I needed to test out ‘system node migrate-root’ in preparation for potentially using it prior to performing a headswap. No physical hardware here just an ONTAP 9.3 HA Simulator lab. These are some observations with a couple of tips.

The syntax is very simple, for example:

The process (see below) starts straight away.

The Process and Timings

The SIM has tiny disks of 10.66GB and 28.44GB usable size. The 10.66GB disks were originally used for 3 disk root aggregates, and the migrate-root moved the root aggregate to the slightly larger virtual disks. On a physical system with much bigger than 28.44GB disks, I would expect the timings to be considerably longer than the below. The below timings are taken from acquiring the ‘Execution Progress’ string - from the job show output - every second.

Nearly 30 minutes for migrate-root on one node of a tiny ONTAP 9.3RC1 HA SIM! And you still need to do a takeover/giveback of the node whose root aggregate was moved (see below).

1) The process disables HA and Storage Failover, and Aggregate Relocation is used to move the data aggregates to the node that’s staying up. The process does not move data LIFs, these will failover automatically, but I noticed a bit of a delay (my test CIFS share was down for 45 seconds), so I’d recommend moving data LIFs onto the node that’s going to stay up first. 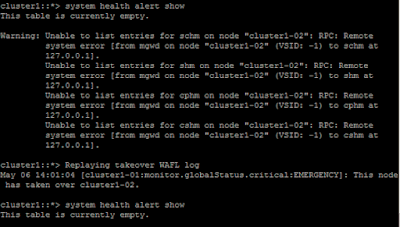 How to non-disruptively migrate a node's root aggregate onto new disks in ONTAP 9
https://kb.netapp.com/app/answers/answer_view/a_id/1086971

If you login to the above KB with your NetApp account, there's a mention:

"Normally, the root-migration will be successful and transparent, however, there are bugs that can cause the script to fail. The node will boot up with a new root aggregate, however, additional clean up steps must be be taken. Technical Support should be engaged to document the failure and assist in recovery."

It's very possible you will need to log a support call, and support will follow certain recovery steps in the KB. So give yourself time. Don't plan to cram root vol moves followed by an ARL headswap into the same day - it might be a long day.

Bug: 976779 - Migrate-root operation fails with an error message
Fixed: ONTAP 9.3+
Workaround:
Perform the following steps to resolve this issue:
1. Run the 'aggr status' command on nodeshell to check if the new aggregate 'new_root' is created.
2. If the aggregate is created and online, perform either of the following steps to resume the process:
- For ONTAP 9.2 or later, run the ' system node migrate-root -resume ' command.
- For earlier ONTAP versions, contact technical support for assistance.

Bug: 1026948 - Migrate-root operation fails with an internal error message
Fixed: ONTAP 9.2+
Workaround:
Perform the following steps to resolve this issue:
- If the command fails with this error message "Internal error: Failed to verify the new root aggregate status" for ONTAP 9.2, resume the migrate-root operation using the "system node migrate-root -resume" command. If you see the same issue in ONTAP 9.1, call NetApp Support.
- For other errors, contact NetApp Support for assistance.

How to non-disruptively migrate a node's root aggregate onto new disks in Clustered Data ONTAP 8.2 and 8.3
at May 06, 2018