Microsoft Hyper-V R2 – why use it over VMware?

on April 11, 2010
Answer = perceived cost savings (see below for pricing comparison and caveats)


Below is a brief article on why one would use Hyper-V over VMware. The general consensus in the IT industry (even from Microsoft themselves) is that VMware’s vSphere is the superior product over Hyper-V. Microsoft are playing catch up. The only reason to go for a Hyper-V solution is cost savings (also, the hope that in three or four years Microsoft may have a comparable product.)

Note: From now on I will just write Hyper-V meaning Hyper-V R2.

Elias lists – poor breadth of OS support (just Windows and SuSE Linux,) no memory overcommit (something Microsoft are now working on, without it you can forget implementing VDI in a Hyper-V environment,) reduced security, can only live migrate one machine at a time, no VM priority restart in the event of a host failover, no fault tolerance, hot adds (hot addition of disks is possible in Hyper-V,) lack of support for 3rd party tools, and immaturity of the product.

Snapshots in Hyper-V can only be committed by shutting down the VM.

Yes, you read that correctly. One of the best features of virtualization (at least VMware virtualization,) is the ability to take a snapshot, make a change, and if it works then delete the snapshot, or if not then roll back. A big failing with Hyper-V is that when you create a snapshot, the only way to subsequently delete it is by shutting down the VM and thus incurring downtime whilst the data on the differencing disks are written back into the original vhd file (you can delete the snapshot from the console, but the differencing disks remain, and are still being written to.) Also, this raises issues of having Hyper-V administrators who are not aware of this, happily taking snapshots, and then all of a sudden people start complaining about the performance of the VM, and investigation discovers that the VM is running off a chain of differencing disks, and the only solution is to shutdown the VM incurring downtime whilst the snapshots are committed back into the original vhd (there could be hours of downtime depending on how many and how big the differencing disks are.)

To quote Einstein “keep things as simple as they can be but no simpler.” A problem with managing a Hyper-V environment is that the tools are a mess. For the same functionality you get out of one console in VMware (the VI Client,) you'll be using 3+ different consoles (Hyper-V console, SCVMM, Failover manager for clustering....) to do the same. And whereas doing something say like enabling HA on a cluster in VMware is just a case of ticking a box; to achieve the same in Hyper-V, there is much more to do in the way of configuring failover manager, creating cluster shared volumes....

3: Hyper-V is not as efficient a hypervisor as VMware vSphere/ESXi

This comes down to the architecture; even if you use Hyper-V standalone, it is still a Windows 2008 operating system just stripped down. An install of ESXi weighs in at around 100MB in size, Hyper-V standalone and you're looking at around 1.2GB, if you go for Windows 2008 full with the Hyper-V role enabled, 3GB. Also, VMware ESX is purely designed for virtualization, Windows 2008 is designed for a lot more besides and hence the added complexity (more things to go wrong too.)


So, if Hyper-V has these failings, why would anyone use it?

The answer is price.

If you have Windows 2008 licenses you have most likely already got Hyper-V.

Caveat 1: You must remember when comparing pricing that you will need to invest in more physical hardware if you use Hyper-V (no memory overcommit hence the VM guest density per physical host is a lot lower.) A very rough calculation is that you'll need to buy twice the amount of memory, or twice the number of servers (and twice the rackspace, power consumption, and cooling costs) as you would in a vSphere enivornment with same number of VM guests. 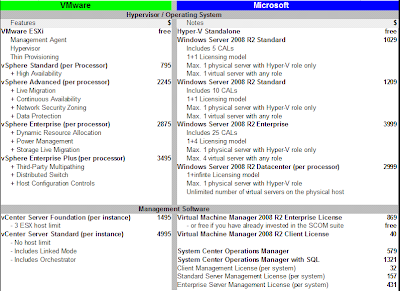 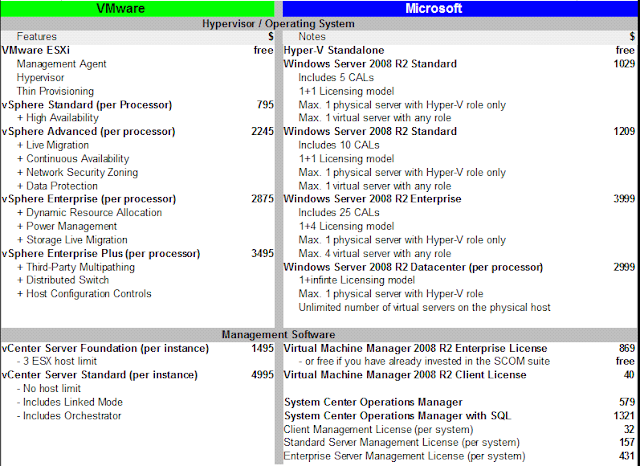