An Easy Way to Rename a VMDK Using a GUI

on September 28, 2011
*The vSphere Client (including vSphere 5 Client) does not allow renaming of VMDK's using the GUI
Using vSphere Client:
1) Edit Settings of the Virtual Machine to be affected, and remove the Hard Disk to be renamed, taking note of the SCSI (X:X) ID
Using the free to download Veeam FastSCP or a pre-existing installation of Veeam Backup:
2) Connect to a host with access to the datastore containing the VMDK
3) Browse to the folder containing the VMDK
4) Right-click the ...-flat.vmdk file and rename as desired, leaving the -flat.vmdk at the end 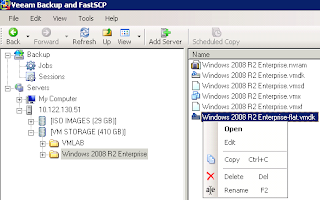 5) Right-click the disk descriptor ...vmdk file and rename as desired

6) Right-click the renamed disk descriptor ...vmdk file and edit, changing the entry beneath '# Extent description' to point to the renamed ...-flat.vmdk file, and close saving changes
# Extent description
RW 73400320 VMFS "Windows 2008 R2 Enterprise-flat.vmdk"
Using vSphere Client:
7) Re-add the VMDK back to the virtual machine as an existing disk
Note: Veeam FastSCP 3.0 is not officially supported on 64-bit systems, and if trying the above with Veeam FastSCP 3.0 on a 64-bit system, the following error will be thrown "Retrieving the COM class factory for component with CLSID ... failed due to the following error: 800700c1." Solution is to either use Veeam Backup or install Veeam FastSCP on a 32-bit system.
Other ways to rename VMDK
1) Shutdown the VM and migrate to a different datastore
*Update: many thanks to gb for the following comment - "Under vSphere 5 migrating to a new datastore no longer renames the vmdk or any other files for that matter. However, It does rename the target directory."


2) Using vSphere CLI:
vmkfstools --server
3) Using the ESX/ESXi host console interface:
vmkfstools -E examplevm.vmdk examplevm-renamed.vmdk
Comment
This may be one of my most pointless posts ever, seeing as it is relatively straightforward to rename a vmdk from command line. Posting along the lines of it always being useful to be aware of different ways to do certain tasks.
Veeam VMware