on July 15, 2012
I was once told a story that when VMware wanted to P2V so many thousand systems, they went to PlateSpin for help.

Founded 2003, bought by Novell in February 2008, 2011 transferred to NetIQ (after Novell's acquisition by Attachmate.)

The below are handy in one place notes from:
https://www.netiq.com/products/migrate/

Integrated testing for safer migrations
Live transfer: “… without taking the source servers offline or having to reboot.”
Server sync: “… test the workload in the new location while continuing to run the source, and then perform a final synchronization before cutting over the workload.”
Migration speed and scalability: “… up to 40 simultaneous workload migrations.”
Multi-platform support: (see below) “... hardware configurations and vendors with a driver database of 55'000 drivers and the ability to add your own custom drivers, and imaging technologies.”

Q: How long does a typical migration job take to complete?
A: The timing of workload migrations with PlateSpin Migrate can vary depending on several external factors such as network availability and the size of the workload. However PlateSpin Migrate has been specifically engineered to be the most robust migration tool on the market in terms of speed and scalability.

Q: Does PlateSpin Migrate support multi-pathing?
A: It depends...

Q: … I want to perform an offline migration from a remote location)?
A: A user should be able to boot the source with the ISO remotely via PXE. Along those same lines, if the issue is the lack of a physical optical drive, we have a process to create a bootable USB thumb drive as well.

From the “View Product Overview Video”
https://www.netiq.com/products/migrate/migrate_demo/?iframe=true&width=800&height=600
“… After using the PlateSpin Recon to plan the project ...”
“… With capacity management information from PlateSpin Recon, they kept the new datacenter running optimally, by continuing to move their workloads wherever fit best ...”

From the “View a Product Demo Video”
http://www.novell.com/media/content/platespin-migrate-introductory-demo.html 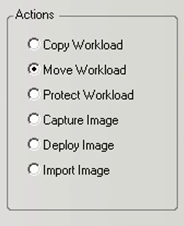 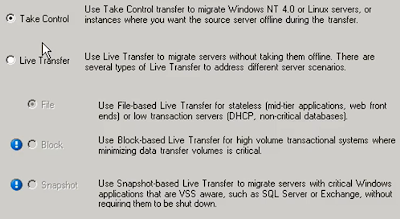 Take Control: Is a cold migration process, this involves shutting down the source machine in order to migrate the workload, this is usually used for Linux and legacy Windows NT servers (but could be used to migrate Windows 2000/2003/ …)

Live Transfer: Is supported by Windows 2000 and above.
> File: Use for low transactional servers, like webservers and fileservers, not recommended for database or highly transaction servers.
> Block: Can be used for database servers and highly transactional servers.
> Snapshot: Windows 2003 and above, it is a file based transfer option, but can take advantage of VSS which allows Migrate to copy SQL databases and Exchange databases without needing to stop the services.

Additional Note
From: User Guide - PlateSpin Migrate 9.1 (April 20,2012)
"PlateSpin Migrate licenses are sold on a per-workload basis (doesn't matter how many PlateSpin Migrate servers you have.) A license entitles you to an unlimited number of migrations on a specific number of workloads. With every migration, a workload unit of the license is assigned to either the source or target. The machine that has the workload unit assigned to it can subsequently be migrated an unlimited number of times. Each time a workload is assigned, the Workloads remaining number is decreased."