This year marks the 30th Anniversary of the 1982 film Tron. Curious to know a bit more about the computer behind the computer animation sequences in the film, the following notes were compiled.

The Foonly F1 was the computer used to create the computer animation scenes in the 1982 movie Tron, and these scenes amounted to between fifteen and twenty minutes of the movie.

The computer only had 2MB of memory, with a disc that had no more than 330MB of storage. The memory size put a limit on the detail of background, and the draw distance.

From Dave Sieg's – "The F1 Cranking out Flight of the Navigator"
"Since the Foonly only had enough disk storage to hold the frame being computed and the frame being printed, the numbers worked out like this: 30 seconds of film at 24 frames per second works out to 720 images each computed and printed at 6000 x 4000 pixels. At twenty minutes rendering time each frame, that meant it took ten days to do 'the run'."

There was only ever one Foonly F-1 made, and it was put together between 1974 and 1978 by Dave Poole, Phil Petit, Jack Holloway, and Dave Dyer. It used the PDP-10 Processor, and it was the fastest PDP-10 ever made. 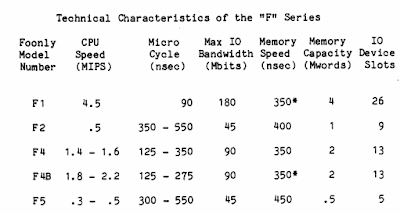 Note: The title was originally "The Super Foonly F1" but this was wrong. Corrected by Lars Brinkhoff:
"The Super Foonly and the F1 were separate computers. The Super Foonly was a project around 1970 to create a PDP-10 clone in TTL.  The project was cancelled when funding stopped, and it was never built. The F1 was begun around 1978 and used ECL."
IT Miscellany