on April 10, 2016
A strange thing happened to the lab today... The lab is unchanged from the spec in this October 2012 post! ... one of the SSDs became unavailable. The lab storage wise runs on two SSDs (OCZ Vertez), and I’ve been going down the route of balancing the load across the SSDs where possible. In hindsight, I might have considered using the SSDs for redundancy, so if one fails, the lab will run mostly fine on the other. Fortunately, a full power down of the system, and power up later, the SSD returned to operation. Perhaps I’d been trying to put too much load through the SSD that went offline, or the SATA II ports!? 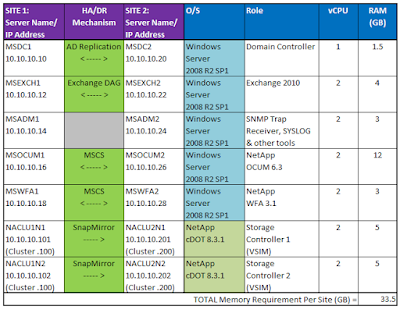 * “If using 2 servers and want HA for all roles, then you will set up DAG for the MB, and a CAS Array load balanced by a hardware load balancer for the CAS role (DAG uses Windows Failover clustering and CAS without a HLB would use Windows network load-balancing, the two services can't be installed on the same server).  The HUB role is HA by default; include both HUB servers in the outbound Send connector“ from here
** No OnCommand Performance Manager included here, simply due to memory limitations in my lab (only 64GB RAM)
*** Don’t have Storage Controller HA in the lab. The two node cluster allows NDO (Nondisruptive Operations), since can vol move to the other node for upgrades etcetera.

With the awesome Technet licenses a thing of the past, alas the version of Microsoft components in my lab are getting a bit old. The more time that goes by, the more I can’t see myself maintaining a lab. With these fantastic resources -

PS With current commitments, I can’t see myself finding time to complete this setup; if I do, you know where the information will be ;-)
Design Exchange2010 NetApp OCUM_6_3 WFA