Solution
Note: Ideally require HPSIM 6 or better for monitoring HP ESXi 4.1 hosts. HPSIM 5.3 with SP1 will still allow monitoring of pretty much everything including the physical disks, and the screenshots from the post are from a HPSIM 5.3 with SP1 (Build C.05.03.01.00) box. Also - for full reporting - the ESXi host must either be built with the HP ESXi build, or the standard VMware build with HP Offline Bundle installed.
1: Log in to HP SIM https://HPSIM Server:50000 with an authorized account
2: From the menu bar → Options → Events → Event Filter Settings...

Make sure that 'Accept unregistered events' is ticked 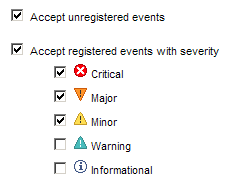 4: From the menu bar → Options → Discovery...
Create a new discovery task for a single system (untick the schedule box) and provide the ESXi host details 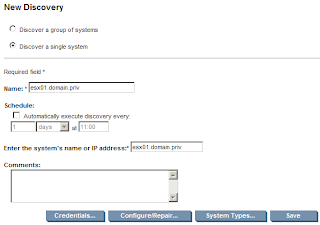 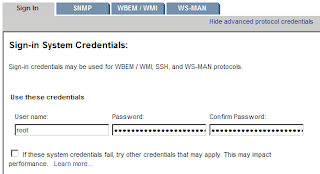 Click OK
5: Save the discovery task
6: Run the newly created discovery task and wait for it to complete
7: Wait a bit longer for HPSIM to process the server and we are done!
The discovery process will also add all the guests on the host into the HPSIM database. 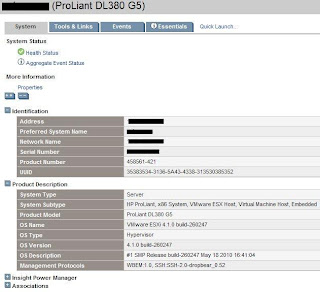 Via 'Properties' on the System tab, health status can be checked 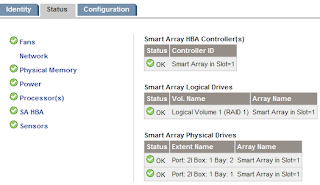 Troubleshooting:
i: Make sure that the HPSIM server can telnet to port 5989 of the ESXi host
ii: If – after 15 minutes of discovery – no information regarding the server has been populated, try re-entering the system credentials (system page → Tools & Links → System Credentials → Edit system credentials....)
Credits:
http://breathalize.co.uk/2010/04/15/hp-sim-and-esxi-hardware-monitoring/

Tag: monitoring ESXi 4.1 host hardware without SNMP for free (HPSIM is available as a free download)
at March 05, 2011 8 comments:

Scenario:
A service provider monitoring 750+ systems on a single HP SIM box, experiences high (near to 100% or 3GHz) CPU utilization – mainly due to the processes sqlservr.exe and mxdomainmgr.exe. The HP SIM box is in a VMware environment, has 1 vCPU, and – as in all good environments – they don't want to just chuck resource at it - especially as it is only a monitoring box and otherwise works fine albeit a bit slow - but see if some performance optimization can be done.
Resolution:
Optimize the HP SIM Scheduled tasks
1: Log in to HP SIM https://HPSIM Server:50000 with an authorized account
2: From the menu bar → Tasks & Logs → View All Scheduled Tasks...

3: Enable the 'Delete Events Older Than 90 Days' task (by default runs once a week and this is fine)

Postscript:
i: Even though this was for HP SIM 5.3, this similarly applies to other versions of HP SIM – HP SIM 5.X, HP SIM 6.X ….
ii: The service provider in question runs 5 Insight boxes, managed by different internal teams, monitoring over 2500 systems.
iii: Semi-related - if operators report the web ui is slow, try disabling script scanning from the workstations anti-virus (at least for the internet browser process)
at March 05, 2011 1 comment: