The 3 Varieties of cDOT Headswap 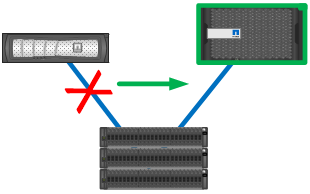 There are 3 different types of Headswap with NetApp Clustered ONTAP/ONTAP:

*CFT is not commonly called a headswap, but that’s pretty much what it is; removing shelves and unassign-ing disks from a 7-Mode head (HA-pair), and assigning to a cDOT head via the 7MTT tool.

I’ve previously covered CFT in these posts from July 2016.

The version of 7MTT was 2.3 back then, now its 3.1, but the process hasn’t changed much. I think CFT is super simple, so - if you’re still on 7-Mode, you can take a few hours outage for the HA-pair, and you want to bring your shelves to cDOT (or even if you’ve purchased new shelves, you could non-disruptively vol move from the old shelves post the CFT, and then non-disruptively decommission the old shelves) - there’s no excuse for not using it.

I’ve never written anything about CFT rollback, and whilst everyone wants a 100% successful transition, it’s prudent to prepare for a rollback scenario just in case. So in a future post I’ll write about CFT rollback and show it’s nothing to be afraid of.

I have previously covered 7-Mode headswaps with the post:

In two future posts, I’ll post my notes for (similar to the CFT “Step-by-Step High-Level Notes/Checklist”):

Personally, I would say all 3 processes are relatively straightforward, yet they all need to be treated with respect: prep thoroughly, plan thoroughly, understand the process, understand the plan, and engage NetApp Professional Services if there’s anything you’re uncomfortable with.

So, that’s the plan for the next 3 posts (time permitting as always.)

1) CFT Rollback is Nothing to be Afraid Of